Japan is amazing.  You really do get a sense of being in a different country and culture. Not least because of the changes of footwear from; shoes, to slippers, to slippers within bathrooms. There is such an attention to small details, pleasant fragrances, different fruit designs in the pavements, bird song on the railway platforms.

The opening ceremony was the first chance for all the teams to get together. a chance to catch up with old friends; from New Zealand, Japan, USA, and a chance to take right back up where we left off joking and teasing with our good friends from Australia and Canada. A traditional Lion dance and a few rum cocktails later and we’re back to reminiscing over previous races and old battles won and lost.

Good first day’s racing: winds progressed through the four races, from moderately light to moderately windy. With  the B1 team finishing the day in joint first place with Japan, and the B2 team finishing first  with the B3 team second.

In the light winds the Japanese appear bolistic, while in the stronger  winds all our winter heavy weather training seams to have paid off (or is it just our heavier weight?).  Keep your fingers crossed it’s only the first day and there is  a lot of competition and races to go. 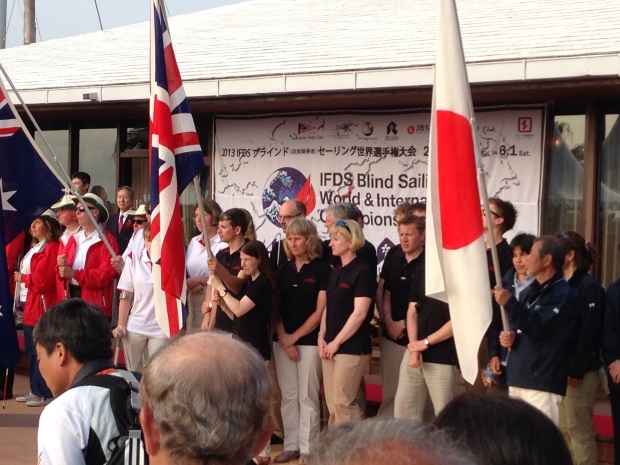