The Salous Game reserve is amazing. Our camp is just outside the official boundaries of the park; however someone forgot to tell the animals, it is great they just wander through the camp. The Shower this morning was just a trickle of water, apparently this is because the baboons had turned on the outside tap beside our tent. Probably the same ones which woke us up by using the roof of our tent as a trampoline.

The bush babies are really cute, but very noisy at night, so to is the hyena which wanders through the tents.

We arrived at the game reserve in a single prop plane, landing on a grass\dirt air strip. Only structure was an opened sided thatch hut building around the trunk of a tree.  Its very like catching a bus. When the single prop plane lands, you wander up with your bag and ask the pilot if he is going in your direction.

We have met the lion pride twice now. Always at noon when they are at their most relaxed, well fed and hot and lazy. Good job really as our jeep pulled up within ten feet of a group of nine of them, females and youngsters.  I was even more perturbed the next day when Rama our guide found the pride again but this time pulled up between two trees under which they were seeking shade. I must confess I was twitching between my shoulder blades, sat in an open sided jeep watching four lions in front with five lions behind us.  Again they were just lazing in the mid day sun, I could even hear one of them panting in the heat.

My favourite was the hippos. Lots of splashing grunting and calling to each other. As we left on our last day, we almost ran over a crocodile in order to pull into the edge of the water so I could get up close to the hippos. We did decide that retreat was best, when four of the hippos started moving in a line towards us. It turned out the jeep though tilted, wasn’t stuck in the mud and we made a hasty retreat.

We left Salous, taking off from the airstrip with giraffes munching in the tree tops alongside.

Now in Zanzibar. This morning had my last dive. We found 7 turtles, I swapped the guiding hand of my dive buddy for the shell of a turtle, the turtle haply guided me around the reef it was Fantastic.

I have finally decided that 50th birthdays aren’t so bad after all. 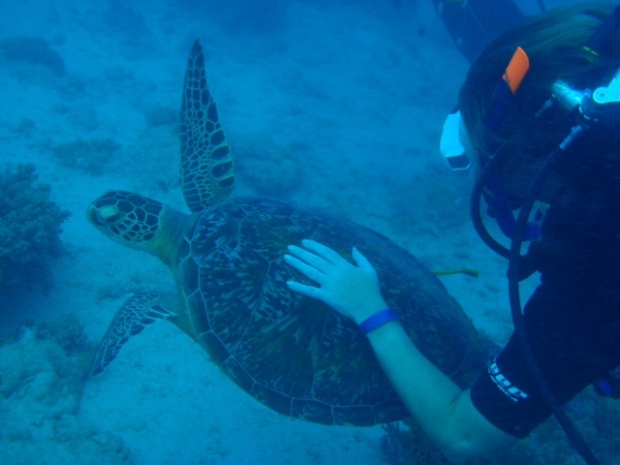